Remember the good old days when Murphy Brown was on TV? Candice Bergen’s wit and perfect delivery was such a treat to watch, before reality TV took over. Luckily for us, she’s having fun doing something new and her wit is still as sharp as ever. Just take her tagline for her project BergenBags: “From One Old Bag to Another”. Let me explain.

By happy accident, Candice Bergen has started painting on people’s luxe handbags. On a whim she painted something on her daughter Chloe Malle’s Louis Vuitton duffle bag and it was posted on Instagram. Now everyone who’s anyone wants her to paint something on their bag. As Dana Schuster from NY Post put it “The hottest purse right now isn’t a Birkin. It’s a Bergen.” Of course what caught my eye were the dogs so I’m going to go out on a limb and say Ms. Bergen loves dogs, because not only is her Instagram full of dog photos but she seems to paint quite a few also… 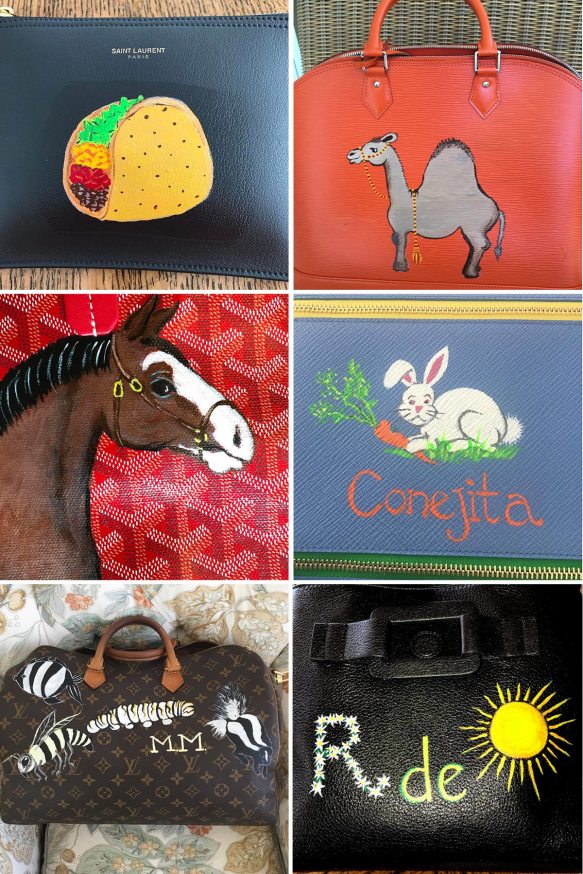 You can see that these bags are some pretty posh canvases: Louis Vuitton, Saint Laurent, Prada, Goyard… and Candice Bergen is a megawatt star after all, so the cost for a custom paint job is $1000 a pop but she donates it all to charity. Today she’s painting bags onsite by appointment at Laura Vinroot Poole’s gorgeous Capitol boutique in Charlotte, North Carolina. I thought about making the 2-hour trip just for entertainment’s sake, what a hoot!

It’s nice to know that stars we’ve adored are real people, out there doing neat things and having fun. Candice Bergen, don’t worry…there’s nothing “old bag” about you!

It’s about that time. The time when I get all of my big ideas and crossed fingers (so to speak) packed up for the next trip to Italy for Pantofola. All I have to do is keep my eye on the horizon for inspiration, just like every other explorer ever, reminding myself that anything is possible even when you’re a small entrepreneur with a carry-on bag full of crossed fingers.

Certainly having your own business has its perks, everybody knows that. But when that business involves regular travel to a place like Italy, those perks are pretty darn perky. Sure, there is a certain amount of stress with running around, business discussions, putting your best foot forward and feeling like you’re always on the mark. That’s all pretty exhilarating. But there are also the in-between moments and experiences, and that is the best part.

Sometimes you can capture those moments in pictures or videos, but not always. It might just be the scent of freshly baked chocolate croissants or a few minutes of eavesdropping on gossip in a café. Or a brief but memorable interaction. On a recent rail journey, I sat in my window seat dreading the moment I’d have to get my bag down from the overhead rack because it was pretty heavy. And it’s not that I couldn’t get it down myself, but I figured it wouldn’t be very graceful and I didn’t want to whack anyone. As we approached my station, I stepped over the guy next to me and stood in the aisle, trying to keep my balance. When I felt fairly stable, I reached above but suddenly a guy on the other side of the aisle (who looked a lot like Viggo Mortensen) looked up from his phone, jumped up and got the bag down for me safely. Embarrassed at the weight of the bag, I thanked him and apologized about it, but of course he said the perfect suave Italian guy thing in the perfect nonchalant manner: “It was my pleasure to help you, so it was no problem.” Swoon. Oh. Okay. Well, that I’ll remember. No photo necessary.

Corny subject line, I know, I know. But listen, I found the coolest thing today and I’m so excited to share it that I can barely type. Not even the dog that is snoring and twitching behind me right now can deter me. I discovered this thing, in the way we always discover things these days: a tweet leads to a click, which leads to an article, which sometimes leads to something really neat. So genuine and heartwarming and full of good will. What is it? Okay. Okay. I’ll tell you.

There’s a new (well, seven months old) website for men called Bureau of Trade. It seems that they curate cool vintage stuff (like iconic furniture, scarves, leather bags) from sites like eBay and feature it in a cleaned up manner, with basic info, etc. because good design also makes things better. Yeah, yeah. But what they also do, which is the reason I’m so excited, is they have a category called COMPANIONS with a dog icon.

When you click the icon, you get this page of photos featuring amazing rescues, mostly dogs but I did see a few horses and a fish.

When you roll over each of the photos, you get some basic info like the dog’s name plus a snarky comment (which of course I like), and also the ability to share it around. Even though it says BUY NOW it’s really just a call to action because in most cases clicking the photo will take you directly to the site for more information to get the adoption ball rolling! Occasionally I did see a purebred dog linked to a breeder, and those were for sale, so we’ll hope they’re on the up and up. I’m highlighting the one below because Clover von Copperfield is such a great name (and, yes, I would love to adopt Clover): 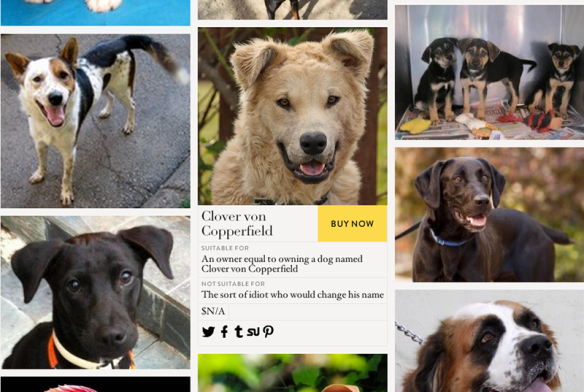 So I know there are already lots of ways to see dogs that are available for adoption, but in this high end retail space it’s a new frontier. I almost want to burst into tears of joy, where’s the kleenex? It’s a very clever and generous thing to do, and I think Michael Moskowitz with his Bureau of Trade is really on to something and for that he gets huge applause.

What’ll they think of next?

Visit the Bureau of Trade and see the pups.
If you’re interested, here’s a good post in the New York Times T Magazine Blog about Michael Moskowitz and Bureau of Trade (although sadly there’s no mention of the pups, grrrrr).

Note: I’ve noticed that posts about travel, Italy, and dogs are pretty popular (yay!). Because a lot of my travel is to Italy for the business I’ve started that’s about dogs, I decided to do some posts with adventures as I follow along this entrepreneurial path. You can read a little more about Pantofola on the About page.

Being an entrepreneur is a tricky thing. Trying to do business with Italian manufacturers and suppliers when you’re a small little upstart, that’s a tricky thing, too. Oh, and not being fluent in Italian is also a tricky thing. Okay, so it’s all tricky. And when I say tricky, that’s a nice way of saying tough, but with an added measure of “I can do it!” oomph. So with a healthy dose of “I can do it!” in my back pocket, I keep going. Plus, by choosing Italy for manufacturing I’m hoping that if an emotional outburst should occur down the road, it’s more likely to be accepted by Italians than another not-so-expressive culture.

One evening after a very long day at a leather trade show I came close. I climbed onto a packed bus with all the other exhausted attendees heading back to the city center. I didn’t have a ticket, and the machine onboard wasn’t working so I decided I should do the moral thing and hop off. I know what you’re thinking: that was stupid. And it was, because I ended up in a zone without many pedestrians, traffic, other buses, street lights, and everything was closing for the night. Oh, I should have taken karate. The other problem is that in Italy you can’t just hail a cab. Well, you can try, but they won’t stop and you end up being the crazy lady flapping your arms around like an angry penguin.

Now I’m not saying Bologna is a bad city but bad things happen everywhere, it was dark and my imagination was in overdrive. I walked and walked, trying to figure out what options I had. Why am I here? Eventually I came to a corner store (also closing up for the night) and saw this loyal dog sitting there waiting patiently for someone inside. Immediately I felt relaxed, calmed, comforted, safe. I was good now. Somehow just by seeing this calm dog I was able to take a deep breath and think more clearly. But not only did the sight of this dog put an end to my panic, it also served as a potent reminder for why I started this business in the first place: the human + canine bond. Thankful for the reminder, I kept walking and one street over I found a bus stop with a map and hopped on the next bus.