Note: originally I posted this yesterday after I read that Ciccio had passed, but when I returned to Facebook I saw that it was denied again (there has been a lot of arguing over his custody as the story of Ciccio has swept across Italy, creating a tense situation of the strays in Brindisi). Sadly, now it is confirmed so I’m re-posting the story. The report I read is that he died peacefully due to cardiac arrest.

With a heavy heart, I have to share the sad news that Ciccio passed away today. If you read my earlier post a few weeks ago, you’ll remember he’s the dog in Italy who captivated the public by showing up at the church for Mass every day since his owner Maria Lochi passed last November. I am not sure of the exact cause of death, but recent posts on his Facebook page have discussed his deteriorating health with photos of him at the hospital. Given his age of 13, plus the fact that he was so broken hearted over the loss of Maria, they suspect he just wanted to go.

I added the top photo because it shows Ciccio when he was happy, you can see the sparkle in his eyes. This photo was taken when he was younger, and his owner Maria Lochi was alive. Compare it to this one that was taken after she passed away, and you can see his sadness. 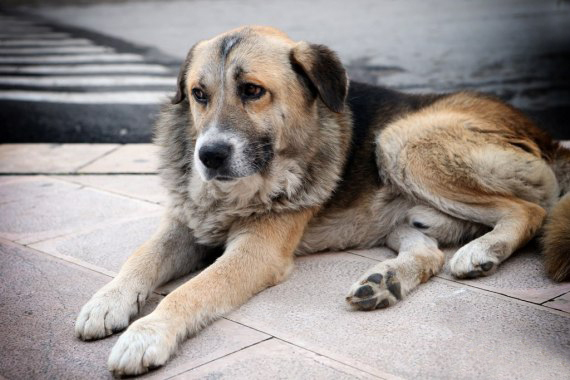 Maria Margherita Lochi was known in her town of San Donaci, Italy for her kindness in looking after and adopting stray dogs and cats. One of her adopted dogs, a 12-year-old German Shepherd mix named Ciccio, was found in a soccer field near her home and is now carrying on his own vigil for Maria since she passed away two months ago. Is Ciccio Italy’s own Hachikō?

Ciccio used to attend Mass services with Maria for years on a regular basis at the church of Santa Maria Assunta, and according to the parish priest he has always been welcome in the church and would sit quietly at Maria’s feet. On the day of her funeral, Ciccio followed her casket into the church and each day since when the bell rings to begin Mass he arrives and sits at the altar.

According to the Daily Mail, Father Donato Panna said: “He’s there every time I celebrate Mass and is very well behaved—he doesn’t make a sound, I’ve not heard one bark from him in all the time he has been coming in.”

“He’s still coming to Mass even after Maria’s funeral, he waits patiently by the side of the altar and just sits there quietly. I didn’t have the heart to throw him out—I’ve just recently lost my own dog so I leave him there until Mass finishes and then I let him out.”

People in the village are providing food and water for Ciccio, and for now he sleeps in a covered area near the church. The priest is hoping to find a home for him soon…but I’m hoping he adopts him and allows Ciccio to remain a parishioner at the church of Santa Maria Assunta. In any case, thanks to massive publicity and a Facebook fan page created by Maria’s son, it appears that there have been many offers across Italy to give Ciccio a warm, safe home very soon.

Also: Ciccio seems to have another name, which is “Tommy”, and news reports use both. Details from the Daily Mail, and Sud Italia News. Photos from Ciccio’s Facebook fan page.

UPDATE February 11, 2013: I follow the story of Ciccio, or Tommy, on Facebook and it appears that Maria’s son Sebastian now has custody of him. Sadly, Tommy is very ill right now at a vet clinic and it is feared that he may not survive. I’m not sure what the cause is, but they are saying that because he is now around 13 years old combined with the heartbreak of losing Maria, the sadness has taken its toll. I will post an update here if I get any further news.