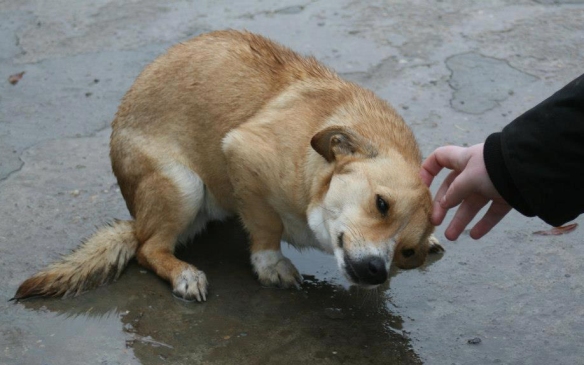 Today’s quote for Typographic Tuesday is by Martin Luther King Jr., in honor of his recent birthday plus all the warm, hopeful feelings here in America that are in the air with an inauguration and a new year for setting things right. I’m including this photo because I think it’s one of the most tender images I’ve seen in a while.

Here’s the background: a few months ago I did a post on Sara Turetta and the group she started called Save the Dogs. One group that really helps Save the Dogs is the Swedish-based Hundhjälpen. Not only do these guys send pallets loaded with all kinds of dog food, treats, toys, medicines, etc. they also take regular trips to Romania and volunteer however they can. In the end, they transport a lot of these dogs back to Sweden and find them warm, loving homes. This photo is from their trip just a few days ago, and the kindness of this simple gesture melts my heart. Thank you, Hundhjälpen and Save the Dogs for never looking the other way.

To find out more about Hundhjälpen or donate, go here. To see all of the photos from their trip, visit their Facebook page here. And of course, Save the Dogs’ website is here. 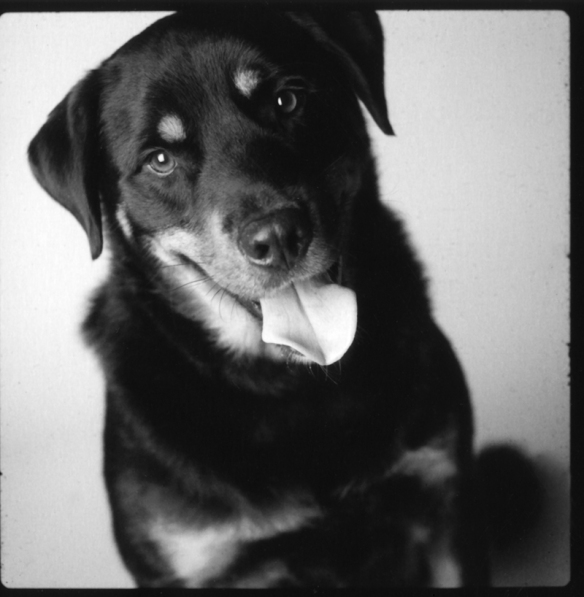 Meet George. This is one of my favorite photos of Georgie boy, even if it is just a Polaroid from his photo shoot with Amanda Jones a few years ago. There’s a strange rule of photo shoots that dictates the best shot of the session will be from a grainy Polaroid. So while there were many great shots that day, I love this one the most.

George is a dog who is mostly made of Rottweiler material. He has the kooky brown dots above his eyes that jump around, and the typical black and brown fur thing going on. But his fur is a bit longer and silkier, his ears are a bit larger, and he got to keep his tail. Hooray! There are some other things about George that are even more unique, like a great Darth Vader impersonation. He’s a lovable fellow, and he especially loves you if you have food. Any food. In fact, he loves food so much that he can hear the tiniest crinkle of the smallest piece of cellophane and he comes running. Besides that, he’s all about living the good life of snoozing. And snoring.

The story of George’s arrival began one beautiful spring morning. As I stood washing dishes and looking out the window, I saw a dog suddenly appear in my yard. Oh no, I already have four. A fence panel had been taken down for a truckload of dirt that was delivered. Please go home, cute dog. I went outside with hands on my hips, determined to nip this in the bud. As I stood there, staring down at him and telling him that he needed to go back home, in a flash he’d jumped up to greet me, hitting me in the face and knocking off my sunglasses. This isn’t working. I went back inside and decided to ignore him. He left. He came back. He carefully chose a spot in the soft grass, in the shade. Ahhh, this looks good. And he stayed.

He had a collar, but no tag. I made signs and posted them around, asked the neighbors, checked with the shelters. Nothing. In Oakland at that time they would keep strays for only 3 days so unless someone came looking for him, he would be euthanized. No one was looking for him. After a few months, I bumped into some other people a few streets over with a dog of the same age that looked just like George—and they had also named him George. Hmm. Maybe George’s dad was a dog named George Foreman, and now just like with the real George Foreman, there are five offspring all named George. You never know.

I’m curious about something: At what point do people begin to see you as a “dog person”?

I guess the quantity involved is a big factor and if so, what’s the magic number when the moniker becomes unavoidable? Two? More than two? More than three? I’m smiling as I write this because there certainly are worse things to be known for and I don’t really mind, although “dog lady” sticks in my craw a little. Craw lady. No.

Let me just say this: I think if a person even has just one dog, but they begin to dress it up in little outfits every day and push it around in a stroller, the label might be knocking at their door as well. Just saying. Fair is fair, right?

In either case, once you are a bonafide “dog person”, people will begin to give you things that are doggy. Doggy tchotchkes. Sometimes they are really wonderful things (and not at all tchotchkes) that they make themselves, like this birthday card that a good friend made for me. I was so happy when I opened it and I cherish it. The truth is my birthday was lousy this year, because my ailing dog Henry took a turn for the worse and it seemed that day might be his last. But this sweet card with these seven pups she drew cheered me up a lot on that sad birthday. And it reminded me that no matter what’s going on, being a “dog person” really is a wonderful gift in itself.