Meet George. This is one of my favorite photos of Georgie boy, even if it is just a Polaroid from his photo shoot with Amanda Jones a few years ago. There’s a strange rule of photo shoots that dictates the best shot of the session will be from a grainy Polaroid. So while there were many great shots that day, I love this one the most.

George is a dog who is mostly made of Rottweiler material. He has the kooky brown dots above his eyes that jump around, and the typical black and brown fur thing going on. But his fur is a bit longer and silkier, his ears are a bit larger, and he got to keep his tail. Hooray! There are some other things about George that are even more unique, like a great Darth Vader impersonation. He’s a lovable fellow, and he especially loves you if you have food. Any food. In fact, he loves food so much that he can hear the tiniest crinkle of the smallest piece of cellophane and he comes running. Besides that, he’s all about living the good life of snoozing. And snoring.

The story of George’s arrival began one beautiful spring morning. As I stood washing dishes and looking out the window, I saw a dog suddenly appear in my yard. Oh no, I already have four. A fence panel had been taken down for a truckload of dirt that was delivered. Please go home, cute dog. I went outside with hands on my hips, determined to nip this in the bud. As I stood there, staring down at him and telling him that he needed to go back home, in a flash he’d jumped up to greet me, hitting me in the face and knocking off my sunglasses. This isn’t working. I went back inside and decided to ignore him. He left. He came back. He carefully chose a spot in the soft grass, in the shade. Ahhh, this looks good. And he stayed. 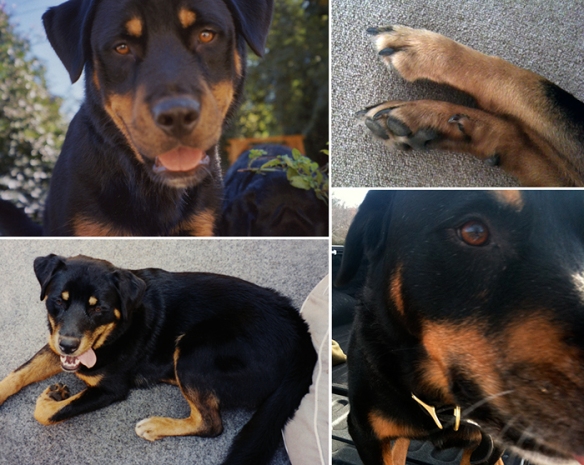 He had a collar, but no tag. I made signs and posted them around, asked the neighbors, checked with the shelters. Nothing. In Oakland at that time they would keep strays for only 3 days so unless someone came looking for him, he would be euthanized. No one was looking for him. After a few months, I bumped into some other people a few streets over with a dog of the same age that looked just like George—and they had also named him George. Hmm. Maybe George’s dad was a dog named George Foreman, and now just like with the real George Foreman, there are five offspring all named George. You never know.