A few months ago I did a post about covers from The New Yorker magazine that feature dogs, spawned by a 1966 cover I bought to frame. Well, I’m psychic—or maybe psychotic—because a few weeks ago I stumbled upon this new release, The Big New Yorker Book of Dogs. The book features articles from past issues, cartoons, and also lots of covers interspersed here and there. Malcolm Gladwell even wrote the foreword, which is equally weird since I loosely tied him into my post as well (yes, I know he writes for the magazine, but I wouldn’t expect him to be the go-to author to write a foreword for a book about dogs). Eerie.

So of course I bought the book, and I’m really glad I did. It’s one of those books that you can pick up, read something short or long, have a laugh, or just flip through. It’s also one of those books that makes a really great gift, especially for the holidays since it’s already red (so just add ribbon, because even when you wrap a book everyone knows what it is). Some of the contributors include Roald Dahl, Maira Kalman, Arthur Miller, John Updike, and E.B. White.

Here is a detail from a 1938 cover, and below a more recent cover by artist Mark Ulriksen.

In addition to essays, there are other interesting spreads mixing things up like this one with a poem titled The Unruly Thoughts of the Dog Trainer’s Lover by Elizabeth Macklin. Opposite the finished poem are the author’s notes and scribbles.

There are also fun little details here and there, like these section openers:

And of course, cartoons are everywhere. Here are a few laughs to wrap things up:

All content from the book The Big New Yorker Book of Dogs, copyright 2012 Random House, Inc.

I love this cover of the November 26, 1966 edition of The New Yorker because it features a dog. And not just any dog, but Underdog! Well, the balloon version of Underdog that is, floating by in the famous Macy’s Thanksgiving Day Parade. For some reason I thought there was a particular story that inspired this cover, like a crash or escape or scandal, but since Underdog debuted in the parade only the year before in 1965 I guess not. There was a Friends episode apparently, in which the Underdog balloon did crash and added to the chaos of their Thanksgiving. But alas, no reality-based Underdog Thanksgiving Day Parade chaos exists that I can find. Oh well, I still really like the illustration and one day I really will frame it.

So then I started thinking about The New Yorker and what other great covers they’ve had over the years that feature dogs. Everyone knows (and loves) The New Yorker’s cartoons, there are so many books that feature collections of different subject matter such as teachers, lawyers, moms, doctors, cats, and of course dogs. But I was more interested in the iconic magazine’s covers, and so I put together an informal survey. 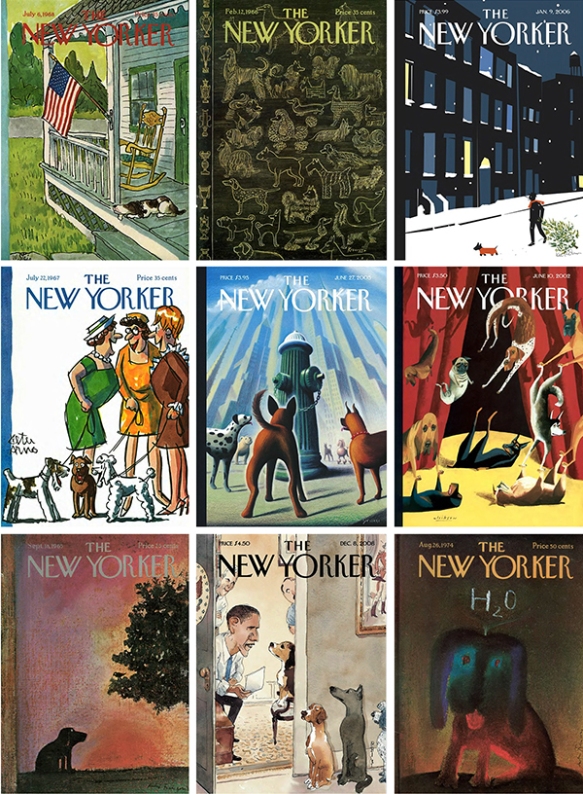 It’s interesting to see the different illustration styles and palettes, and notice what trends come and go over the years. A few covers I’ve chosen feature the work of Mark Ulriksen, one of my favorite illustrators based in San Francisco (see the post here), but I’m not so familiar with the others. Some covers seem to be referring to a current event, like Obama getting ready to enter the presidency (and he’s listening to the dogs with their demands for maybe an off-leash area in the rose garden?), or it’s winter and time to ditch the old Christmas tree in the snow. Other times you just have to wonder what’s going on, if anything (is that dog thinking of water because it’s August or was there a big water shortage in 1974? I don’t remember, I was a kid). Not being a New Yorker myself, I’m usually drawn to the covers that feel, well, more “New Yorky”, like the one in the center below with the dog on the stoop having a sale. Or the one above with the Gotham-sized fire hydrant surrounded by a group of very happy dogs (bliss I guess). One thing that’s interesting to do is track is the cover price, beginning with a measly quarter in 1965 and ending up at six bucks. For now.

Coming back full circle: if you love to root for the underdogs of the world and are interested in the phenomenon, there’s a really wonderful article by author Malcolm Gladwell that appears, oddly enough, in a past issue of The New Yorker. Not the November 26, 1966 issue, however, that would be weird. And impossible. Here’s the link.