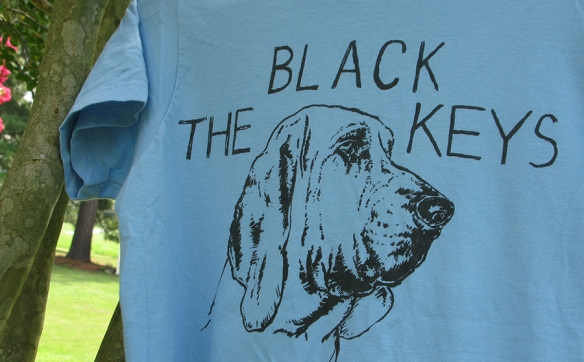 I love music, all different kinds. But the truth is, you’re more likely to find me listening to tried-and-true Ella Fitzgerald and Louis Armstrong than a flavor of the month band. Don’t get me wrong, I do like contemporary music, but I don’t really seek out the hot and trendy (that’s what nephews are for) and so it usually takes getting my ears boxed for me to take notice. But even if I love it, I will avoid the dreaded concert t-shirt at all costs. I want to like them, I really do. But I just can’t.

My reason is simple and I know what to expect: as a rule, concert t-shirts are not very attractive. Typically ill-fitting (if you’re female) black Beefy-T’s with wall-to-wall garish typography and graphics front and back…It’s Wayne’s World on a hanger. Disclosure: I don’t usually go for any t-shirt with things printed, glued, stapled, sewn, tied or otherwise affixed so I’m predisposed to hating them. But concert t-shirts are just usually so :-/ and it’s easy for me to pass them up. Faded. Black. Cotton. Chills.

But put a cool illustration of a big ol’ dog face on there and, if it’s done well, I’m going to have to check it out. What a sweet droopy bloodhound face and where’s my wallet? A few years ago my husband surprised me with tickets to see Kings of Leon. I had no idea who the opening bands would be that night, but when I passed the t-shirt stand this design immediately caught my eye. The Black Keys? Who’s that? While I’m generally a little behind in the up-and-coming band department, I think maybe a lot of people hadn’t heard of The Black Keys at that point (except my nephew) because this was long before their music featured in 3 out of 5 television ad campaigns. But since they had this big dog face on their t-shirt, I figured they were going to be really good. And of course they were. Now who’s Kings of Leon?

So dogs really do make everything (even concert t-shirts) better.