For as long as I can remember (but not quite as far back as this photo), southern California’s Tournament of Roses Parade has been a non-negotiable part of my New Years Day. For anyone unfamiliar with the parade, it is shown on television live from Pasadena. A very colorful display, it’s a welcome sight to people living in drab frozen places who want to see vibrant flowers while their own are covered in ice. The floats are strictly made out of real flowers and other vegetation, and they get pretty darn creative. Normally the weather is sunny and glorious in southern California (but not this year) and they often share a recently updated statistic about how many frozen people are lured to the Golden State after watching, ditching their snow shovels and hitting the road for t-shirt weather. The parade always includes the best marching bands from across the country (and increasingly around the world), people on horseback, a few celebrities, and of course some great dogs. A few from the LA Times:

This year’s Grand Marshall is the amazing Dr. Jane Goodall, and the theme is based on Dr. Seuss’s book, Oh the Places You’ll Go! Best Friends Los Angeles, part of the main Best Friends rescue group based in Utah, is aiming for their shelter to be a no-kill, and one of their dogs by the name of Chuck was chosen to walk alongside the carriage with Dr. Goodall to represent America’s homeless pets. Sweet. He did a great job. Here are two pictures of Chuck from the BFLA Facebook page, the second one being just before his television debut! 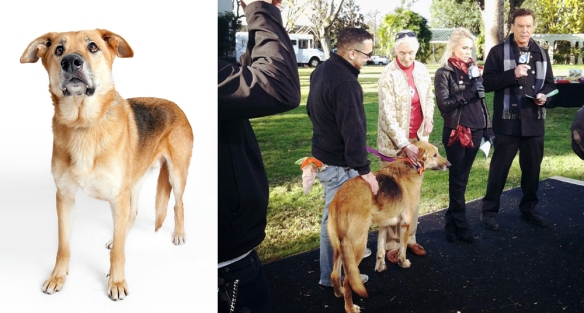 Another float sponsored by the Beverly Hills Pet Care Foundation was beautifully designed and executed, with giant flower-clad dogs and cats but also lots of real dogs held by volunteers. The announcers said that all of the pets on the float are available for adoption and you could connect with them at the end of the route. The star Jack Russell terrier Uggie from movies like The Artist was even onboard with his trainer (but I don’t think you could adopt him) as the official mascot of the float, because he’d also been given a second chance.

But the best part of this year’s parade brought together many wonderful things: dogs, our military service members, and reunions. A few minutes before the float arrived, a woman and her son were introduced as lucky winners of a contest for military families living in Germany, and she said that her husband was currently serving in Afghanistan. The prize included a trip to California plus tickets to the famous parade. Next arrived the Canines of Courage float, sponsored by the Natural Balance pet food company, to honor (big hooray!!) canines that serve our country alongside troops. This float was inspired by a monument that’s currently being built to these canine heroes in San Antonio. Various branches of the military were represented by members in their dress uniforms and dogs that have served including one sweetheart German Shepherd mix named Lucca, who had lost a leg to a land mine in Afghanistan. In addition to a representative soldier, there were 4 dogs also made of flowers to represent the four most common breeds that typically serve: Doberman Pinscher, Labrador Retriever, German Shepherd, and Belgian Malinois. Beautiful. Below are some photos of the float during its construction and in the parade, and also the happy girl Lucca, to whom we owe a great debt.

Last but definitely not least, the contest winner and her son were pulled from the crowd to be reunited with one other rider on the float, her husband in his army fatigues. I jumped off my treadmill, not very gracefully, to make this video. It’s really wonderful, even the parade announcers were choked up. And, one last thing I noticed: this military family’s last name is Pazz, and it’s pronounced like “paws”. How cool is that?

Article on the Canines of Courage float from the Los Angeles Times here.
If you’d like to watch the whole parade, KTLA’s website has it here.