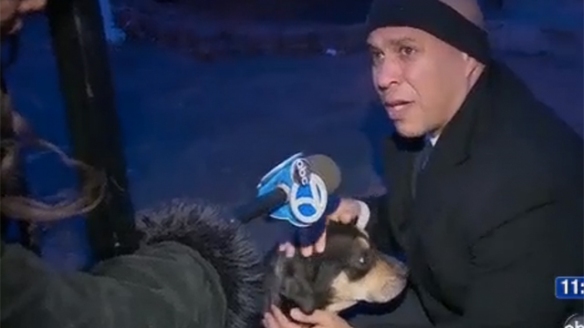 Newark, New Jersey super mayor Cory Booker is in the news today for saving a freezing dog after seeing a tweet from a local TV news reporter. This is one guy who really jumps in and saves the day, having saved people from burning homes and shoveling snow for residents of his city. Once this pup was warm and safe he even went on to personally shred the careless owners. Go Cory!

From the story on mashable.com:
“This is brutal weather,” Booker told WABC. “This dog is shaking really bad and you just can’t leave your dogs out here on a day like this and go away and expect them to be OK. Hypothermia on any animal including a human animal will set in pretty quickly. So this is very sad. You can just feel the dog shaking pretty badly.”

Booker put the dog in a heated police car, called its owners and scolded them for leaving the dog outside. The owners said they were away from home and didn’t know how the dog, named Cha Cha, got out of the house. They apologized to Booker.

Check out the story here on Mashable, including the tweets that led to the rescue here, or the WABC news story here.